From development through cloud deployment

Ansible Container can manage the lifecycle of an application from development through cloud deployment. To demonstrate, we’ll create, test and deploy a new social media application called Not Google Plus.

The application comes from a tutorial, but not to worry, this isn’t a programming exercise. Instead, we’ll focus on how to use Ansible Container at each phase.

Before continuing, you’ll need a couple of things:

Ansible Container uses Ansible roles to build images, initialize projects, and add services to existing projects. You can find roles contributed and maintained by the community at Ansible Galaxy.

Keep in mind, there are three different types of roles. There are standard roles that simply execute tasks, which we can use with Ansible Container to build images. Container App roles can be used to initialize an Ansible Container project, and Container Enabled roles define a service that can be added to an existing project.

To initialize our project we’ll use the Container App role, ansible.django-gulp-nginx. We’ll start by creating an empty project directory, setting the new directory as the working directory, and then running the init command to copy the full contents of the role into the directory. This particular role will give us a fully functioning Django framework.

Go ahead and initialize a new project called demo by opening a terminal session, and executing the following commands: 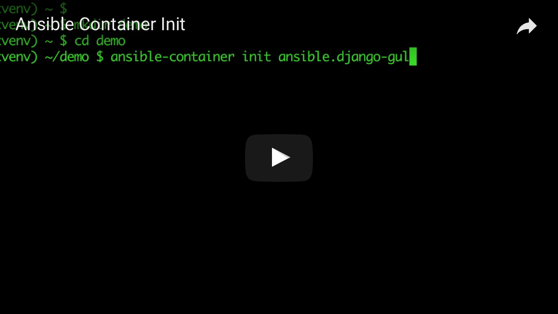 The container.yml file defines four services: django, gulp, nginx, and postgresql. Before we can use the services, and begin application development, we need to build the images. Start the build process by running the following command: 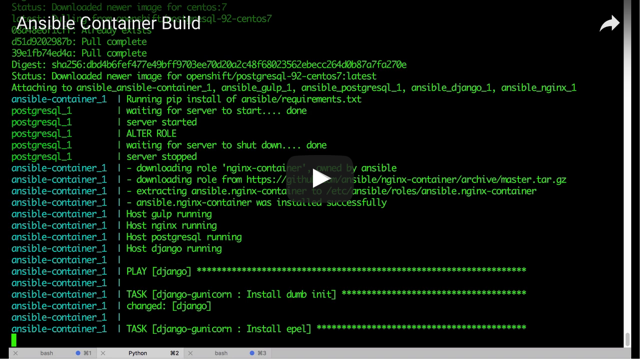 After each role finishes, a snapshot is taken of the service container, and committed as a new image layer. Together, the complete set of layers forms the image for the service.

When the build completes, run the docker images command to view a list of local images. The output will include the following images:

The containers are now running in the background. The gulp service proxies requests to the django service. But before it can be accessed, it first has to install node and bower packages required by the frontend, and then start the web server.

Check its progress by running the following to watch the service’s log output:

Once you see the following in the log output, the web service is running and accessible:

To access the server, open a browser, and go to http://localhost:8080, where you’ll see the default “Hello World!” page.

The containers are currently running in development mode, which means that for each service the dev_overrides directive takes precedence. For example, take a look at the gulp service definition found in container.yml:

In development, dev_overrides takes precedence, so the command /usr/bin/dumb-init /usr/local/bin/gulp will be executed, ports 8080 and 3001 will be exposed, and the container will be linked to the django service container.

The application can be started in production mode, by running ansible-container run --production. In production the dev_overrides directive is completely ignored, which means the /bin/false command is executed, causing the container to immediately stop. No ports are exposed, and the container is not linked to the django service.

Since the frontend tools provided by the gulp service are only needed during development and not during production, we use dev_overrides to manage when the container runs.

The same is true for the nginx service. Take a look at the service definition in container.yml, and you’ll notice it’s configured opposite of the gulp service:

In development the nginx service runs the /bin/false command, and immediately exits. But in production, it starts the nginx process, and takes the place of the gulp service as the application’s web server.

Let’s make some updates, and create the Not Google Plus app, and then we’ll see how to test and deploy it. To make the changes, run the following commands to download the source code, and update the project:

Check the gulp service log using the docker logs -f demo_gulp_1 command, and once the web server is running, the Not Google Plus application will be available. If you open your browser, and go to http://localhost:8080, you’ll see that the “Hello World!” page has been replaced by our social media site.

Click the image below to watch a video tour of the site: 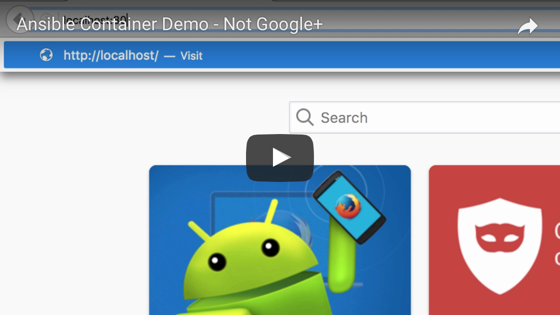 Now that you made changes to the application by adding the code for Not Google Plus, you’ll need to build a new set of images that contain the updated source code, before moving on to testing and deployment.

Run the following to stop the containers, and then start the build process. This time, use the --no-container-cache option on the build command to force the rebuild of each image, and insure that the new source code gets picked up.

Once the build process completes, take a look at the local images using docker images:

There’s a new set of images containing the updated code. Now when you deploy the application to production, you’ll be deploying the Not Google Plus app.

For testing, we want the application in production mode, so that it runs exactly the same as it will when deployed to the cloud. As we pointed out earlier, when run in production the dev_overrides settings are ignored, which means we’ll see the gulp service stop and the nginx service start.

To start the application in production mode, run the following command:

If we were running a CI/CD process, this is the point where we would run our automated testing scripts. In lieu of that, open a browser, and once again go to http://localhost:8080 to confirm the site is working as expected.

Click the image below to watch a video of the application starting with the --production option: 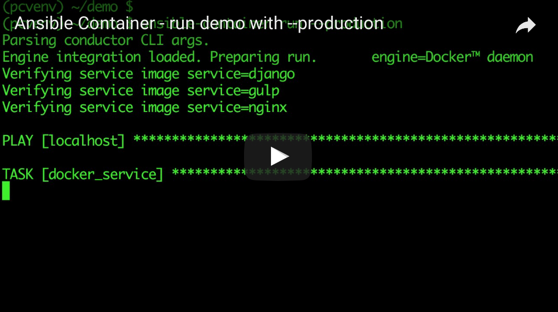 Once the application passes testing, it’s time to deploy it. To demonstrate, we’ll create a local instance of OpenShift, and run the deploy command to push images and generate a deployment playbook.

To run the deployment, you’ll need access to an OpenShift instance. The Install and Configure Openshift guide at our doc site provides a how-to that will help you create a containerized instance.

Minishift is a virtual machine that hosts a Docker daemon, and a containerized OpenShift cluster. The following demonstrates creating a minishift instance by running the Ansible role, chouseknecht.minishift-up-role: 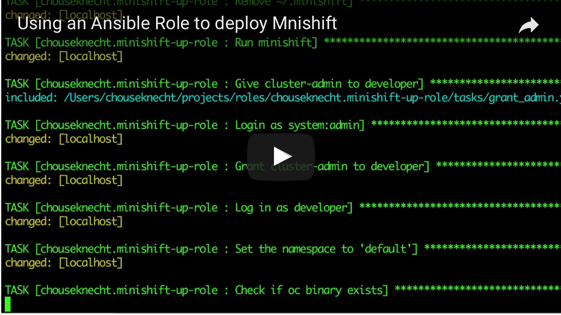 To use the role, you’ll need Ansible installed. Also, note in the video that the playbook is copied from the installed role’s file structure. You’ll find the playbook, minishift-up.yml, in the files directory.

Now that you have an OpenShift instance, run the following to make sure you’re logged into the cluster as the developer user, and create a demo project:

When you run the deploy command, it will attempt to authenticate to the registry using docker login, which will check for an existing credential in ${HOME}/.docker/config.json. If there is an existing entry in this file for the local OpenShift cluster, you’ll need to remove it, if the token has expired. Also, you’ll need to remove it if the entry points to a key store. Key stores cannot be accessed from within the Conductor container, where the authentication with the registry will actually take place.

The project name is defined in container.yml. Within the settings section, you will find a k8s_namespace directive that sets the name. The project name is arbitrary. However, before running the deploy command, the project must already exist, and the user you’re logged in as must have access to it.

The reason for creating the project first is because the deploy process will attempt to push images to the local registry using the project name as the namespace. If the project does not already exist, then the push will fail.

Next, use the deploy command to push the project images to the local registry, and create the deployment playbook. For demonstration purposes, we’re referencing the local_openshift registry defined in container.yml. Depending on how you created the local OpenShift cluster, you may need to adjust the registry attributes.

Once you’re ready to push the images, run the following from the root of the demo project directory:

The above will authenticate to the registry using the developer username, and a token generated by the oc whoami -t command. This presumes that your cluster has a developer account, and that you previously authenticated to the cluster with this account.

You will also find a roles directory containing the ansible.kubernetes-modules role. The deployment playbook relies on this role for access to the Ansible Kubernetes modules.

To deploy the application, execute the playbook, making sure to include the appropriate tag. Possible tags include: start, stop, restart, and destroy. To start the application, run the following:

Once the playbook completes, log into the OpenShift console to check the status of the deployment. From the Applications menu, choose Routes, and find the URL that points to the nginx service. Using this URL, you can access the appication running on the cluster.

Watch the following video to see the full deployment: 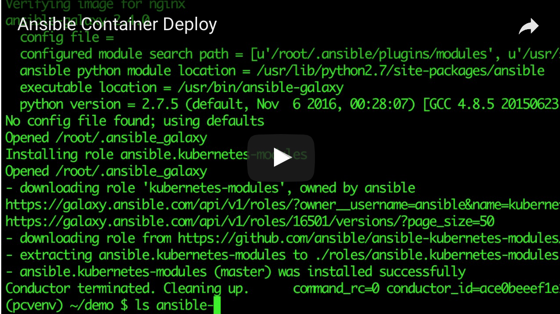